Our Breeding Program: What It's All About

Good for the breed …

If you are interested enough in acquiring British Soay sheep to have made it this far on our website, you probably have already read, either here or elsewhere, about the general notion of conservation breeding and how important it is for the preservation of rare breeds like Soay sheep. In a nutshell, the various forms of conservation breeding each seek to ensure that, to the greatest extent possible, all the genes carried by the current generation of animals will be transmitted to the next generation and the generations after that.

… good for the buyer

What most discussions of conservation breeding do not focus on, however, is how important it can be for buyers of Soay sheep. Just as a system like the one we have implemented on our farm helps to conserve the overall gene pool of Soay sheep, our particular version of rotational breeding also ensures that the lambs born here each spring carry as many different combinations of genes as possible. We have the most genetically diverse crop of adult British Soay sheep in the U.S. and Canada and we breed carefully to be certain we can provide buyers with lambs of equally rich genetic heritage.

Several aspects of our breeding system provide assurance to our customers that they are starting, or enhancing, their flock in a healthy and genetically responsible way. First, we have enough ewes and rams to set up multiple breeding groups each fall, each serviced by a different ram. Our goal, which we almost always achieve, is to put together starter flocks in which no two ewe lambs share either a mother (i.e., no twins are sent to the same new home) or a father (i.e., no half siblings).

Some new breeders want to spread out the acquisition of their starter flocks over several years, allowing them to ramp up slowly for economic reasons and to "try out" Soay sheep before making a large time commitment. Because we use rams as breeders for only one season, we can provide lambs in the second, third, and subsequent years that are unrelated to the lambs the buyer bought the first year. We especially welcome these multi-year sales because they have the added benefit of ensuring that the new breeder ends up with optimal genetic diversity from the get-go. 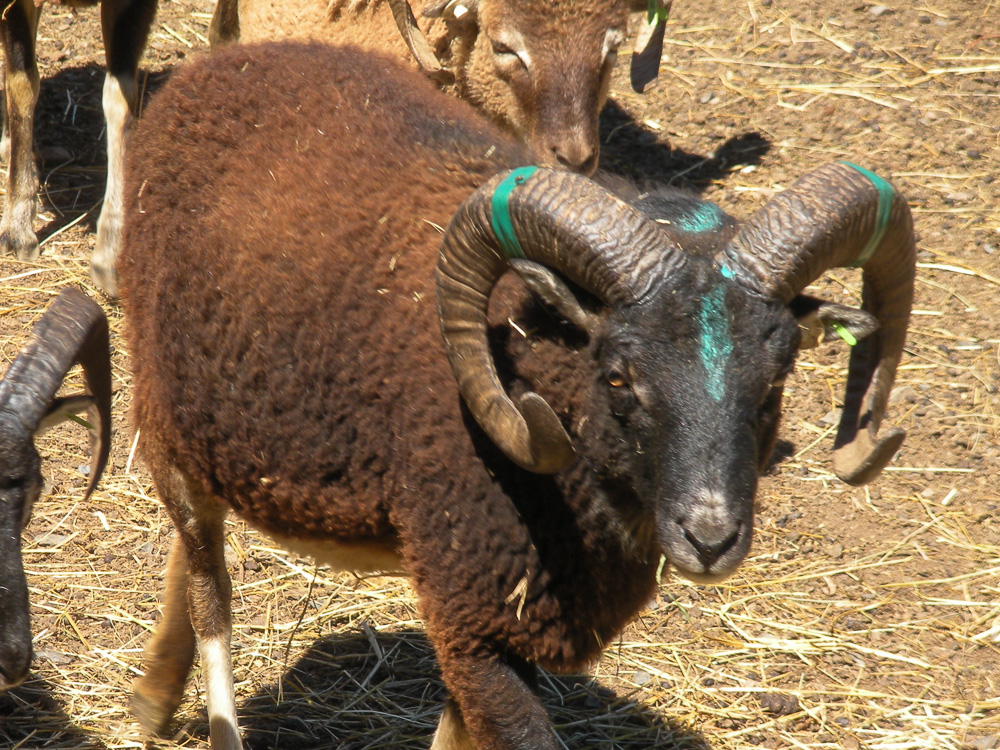 Once we have used a ram for breeding, he is usually for sale. Although, according to the rules of our breeding system, we are done with him, he is still a perfectly good, proven ram, between two and four years old. Moving on to new “opportunities,” he offers a different set of genetics to his new flock of ewes.

A good use for extra ram lambs

Another enhancement we are able to provide for our customers flows from the fact that our ewes usually deliver up more little boys than we need. Our relatively mild climate and grass-growing season allow us to hold some of these "extra" ram lambs over the winter and incorporate them in the next year's orders. Because these yearlings always have different fathers than the current crop of ewe lambs with whom they will be teamed up, the resulting genetic mix can be even richer.

What about the ewes?

We discuss elsewhere the details of how we assign our ewes and rams to breeding groups and how we intermix these groups in a 3-year cycle of rotational breeding. For buyers, the key element of our method is that we do not breed our little girls their first fall, but rather allow them to grow for an additional year. We learned the hard way that the extra maturation results in ewes with better stamina and longevity, and larger, healthier lambs that are more robust from day one.

… good for the breed

In sending our starter flocks and individual breeding rams to new homes, we look forward to having the new and enhanced flocks contribute to the conservation and thoughtful dispersal of British Soay sheep throughout North America, assuring the continued viability of this special variety of ancient sheep.