Just the right size for small farms and ranches

Soay sheep are small and easy to deal with. At maturity, ewes generally weigh 50 – 60 pounds and no great strength is required to handle or work them. Even the rams, which can get to be 70 to 80 pounds, are manageable by one person. 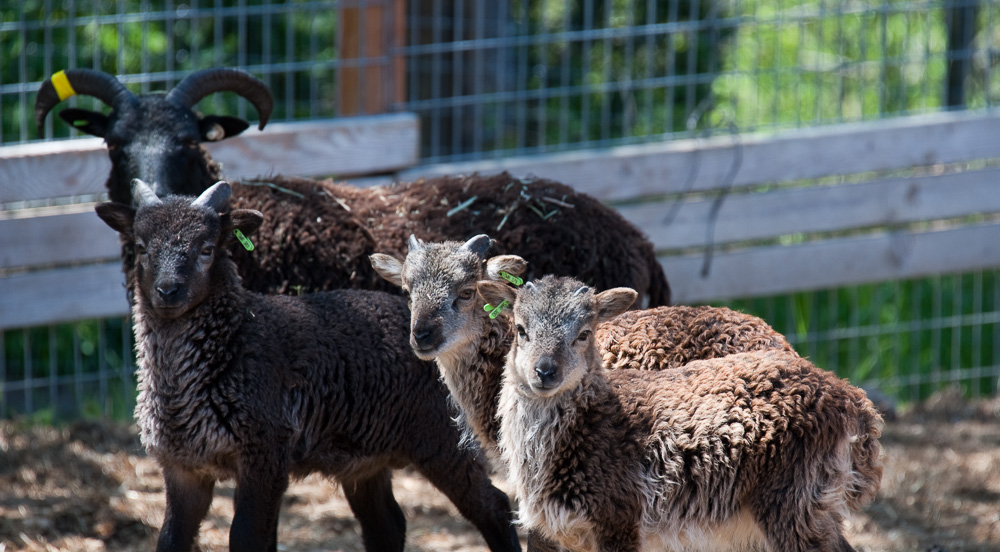 As a matter of fact, it is not necessary to handle Soay sheep much at all. Once a year, usually in the spring, we vaccinate our animals and trim their hooves, and this requires that we tip the animals on their rumps for a few minutes. The sheep don't seem to mind too much, and once in position, they give up whatever fuss they were making and relax. To be sure, tipping is a bit of a judo move, with leverage and timing being more important than brute force. But even if you do not have the moves perfected, a fifty-pound Soay ewe handles way more nimbly than a monstrous Suffolk four times as large. The only other times we need to really get hands on with our Soay sheep is when we worm them, but this is less of a production for both sheep and shepherd, since the animal remains standing.

There's another benefit to keeping small sheep. The reason our pastures remain in such good shape is due in no small part to the lightfootedness of Soay sheep. Even the pasture where we carry our ewes over the winter, which gets grazed all 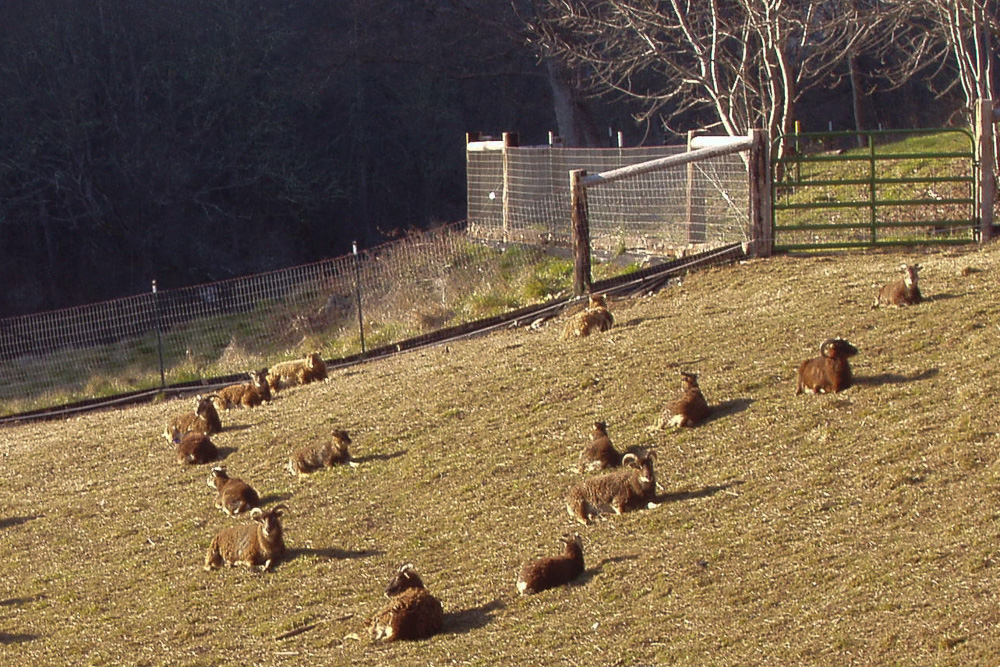 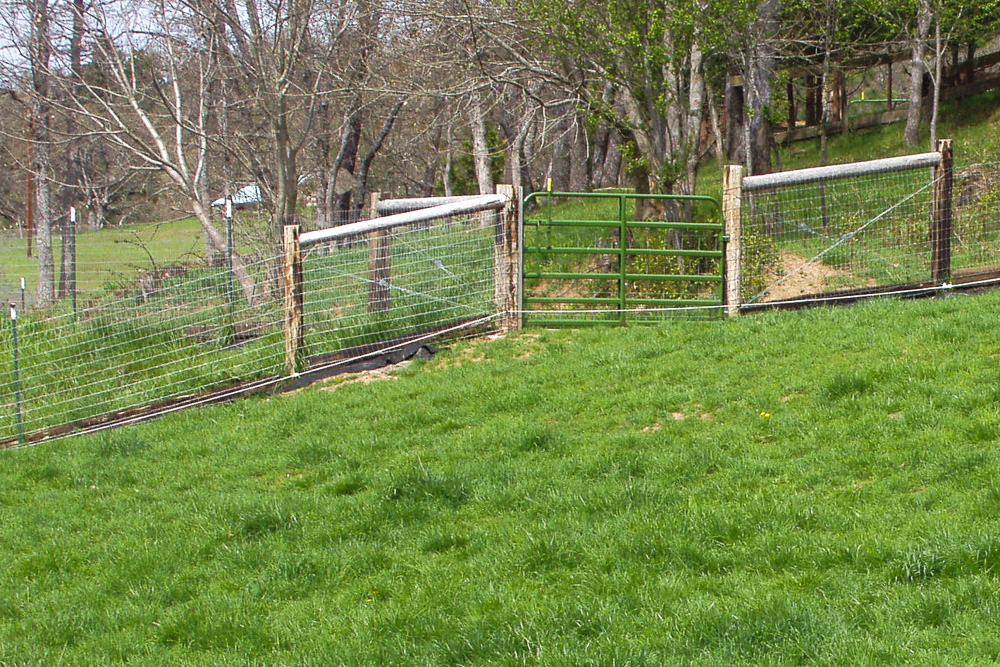 the way to the ground and which seems a muddy wasteland by the end of January, recovers and turns into a lush grassy playground by the middle of April. Soay sheep are so light that even months of hoof traffic in rainy conditions does not ruin an established stand of pasture grasses.

It is often said that Soay sheep make wonderful lawnmowers, and they do, but the notion you can trade in your mower for a flock of sheep — any kind of sheep — is, sad to say, a bit of wishful thinking. The trouble is that the grass grows like mad in the spring and then gradually slows, finally petering out altogether by late fall. If you have a small flock, they will not be able to keep up with the grass in April and May, and if you have a flock large enough to handle the spring pastures, your fields will start to look threadbare come late summer. 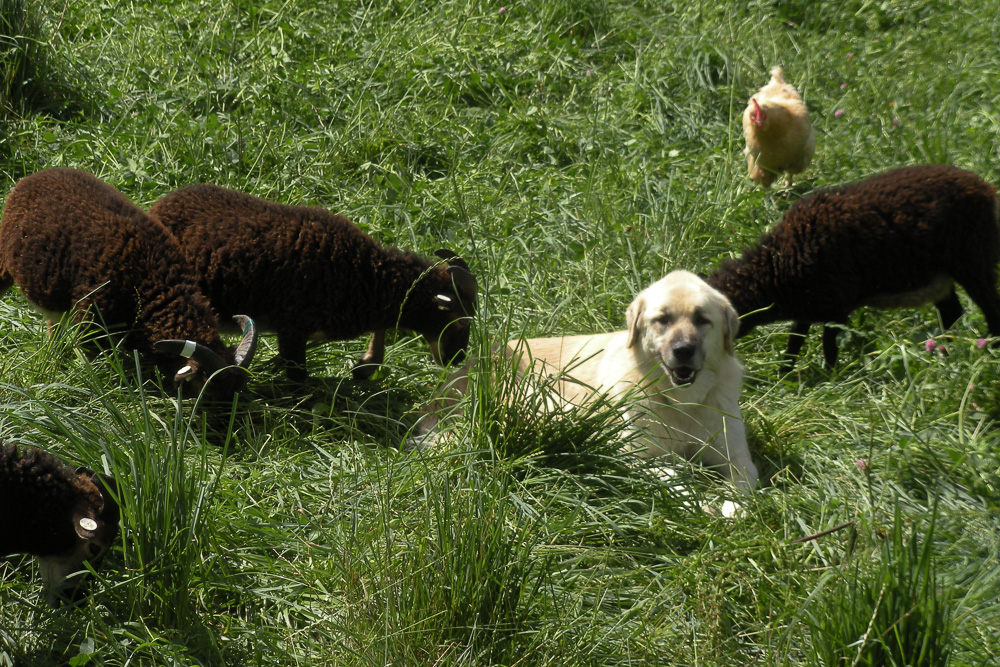 On the other hand, your lawnmower is useless in the weed-pulling department, and this is where the Soay sheep make up for their imperfection as lawnmowers. They are truly splendid as warm-blooded WeedEaters. Heritage sheep much prefer weeds ("forbs") over grasses, and there are very few weeds they will not gladly eat, especially when the weeds first emerge in the spring. Even bull thistle is vulnerable at the seedling stage. And if you are in an area where blackberry or poison oak is a problem, these little guys are just the ticket. The most you need to do is mow or chop down the berry vines or poison oak once. Soay sheep absolutely love fresh blackberry and poison oak as it emerges from the ground. You are going to be rotating your flock through the sections of your pasture anyway in order to have consistent grass growth. Your Soay gang will seek out the new weed growth as they move through the pastures and eat it first before they turn to the grass. After a couple of seasons the blackberry and poison oak roots starve and die off. It really is that easy; we've done it and we have the recovered pastures to prove it.

Soay sheep are easy keepers. Their ancestors were toughened by centuries of survival under brutal conditions on a 300-acre island way out in the North Atlantic Ocean off the northwest coast of Scotland. Only strong, thrifty, capable and self-reliant animals survived in such a place. Any physically weak individuals were eliminated by Nature's relentless, merciless culling. Consequently, today's Soay sheep are tough characters, despite their diminutive size and seemingly delicate structure. They bear their lambs easily and quickly, 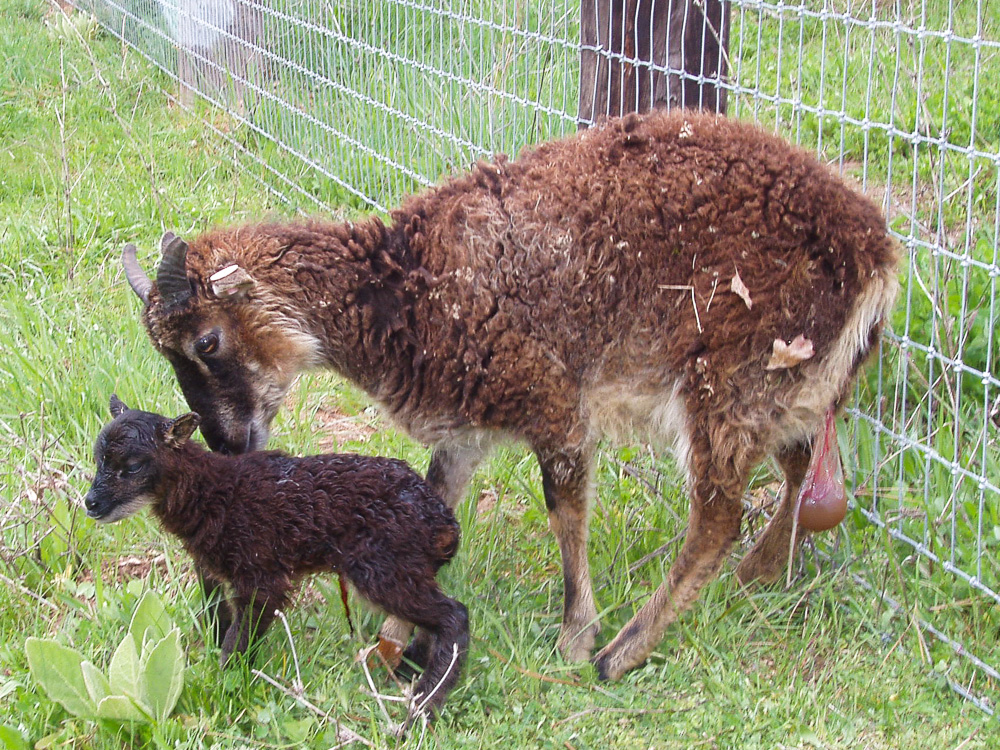 requiring assistance rarely if ever. They are comparatively resistant to parasites, and their shelter requirements are minimal. Our flock occasionally sleep outside their shelters even in light snow or rain, retreating only in downpours. 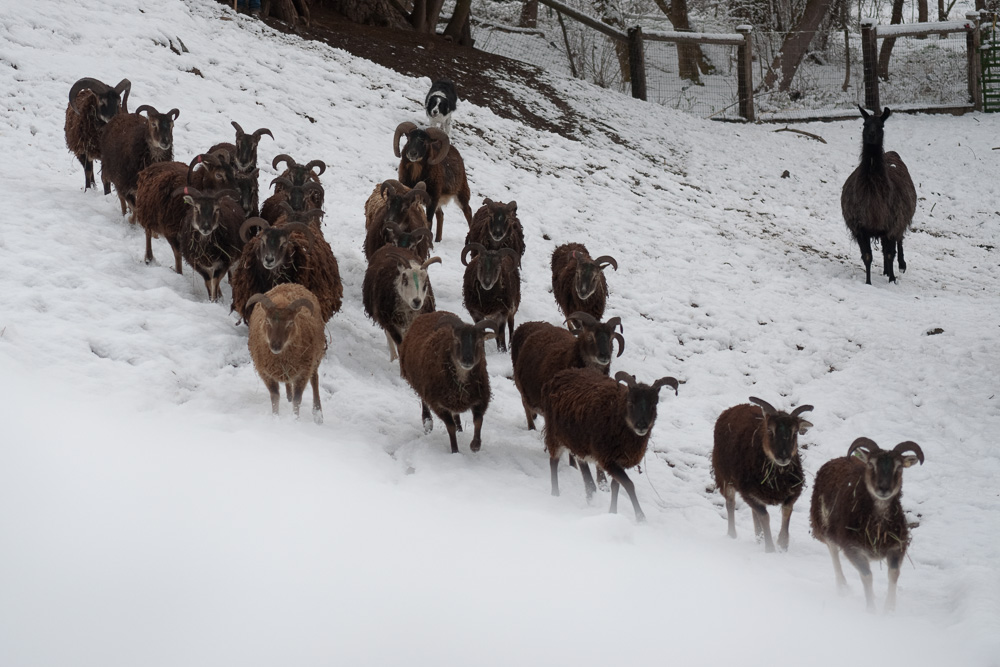 The wool of a Soay sheep is shed naturally in the spring, a characteristic that pretty much eliminates one of 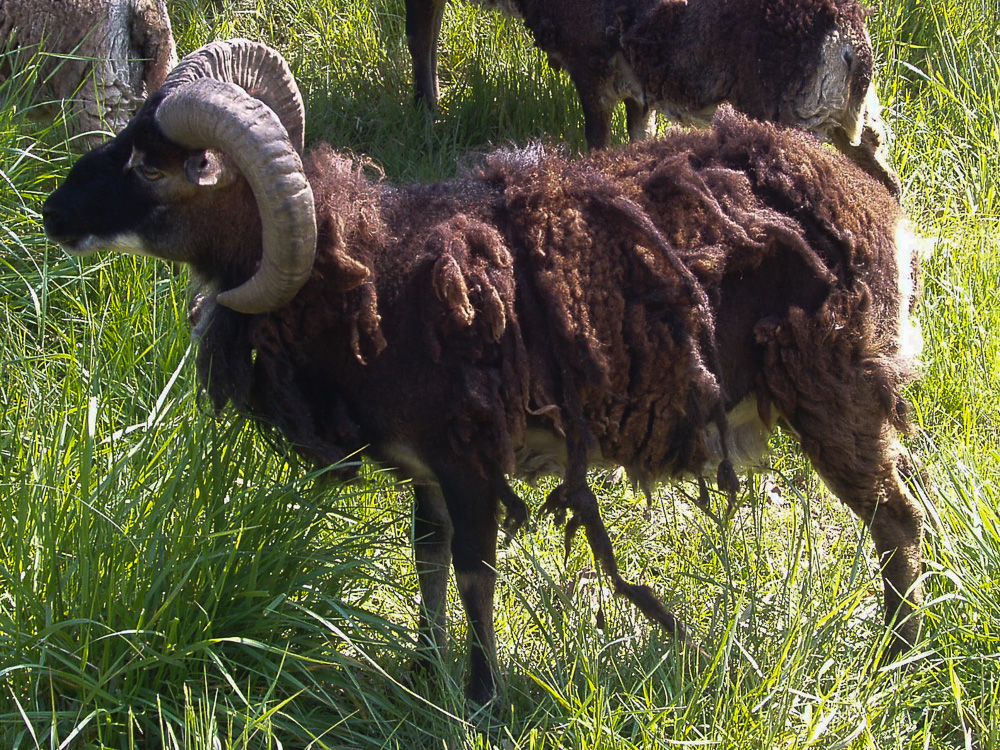 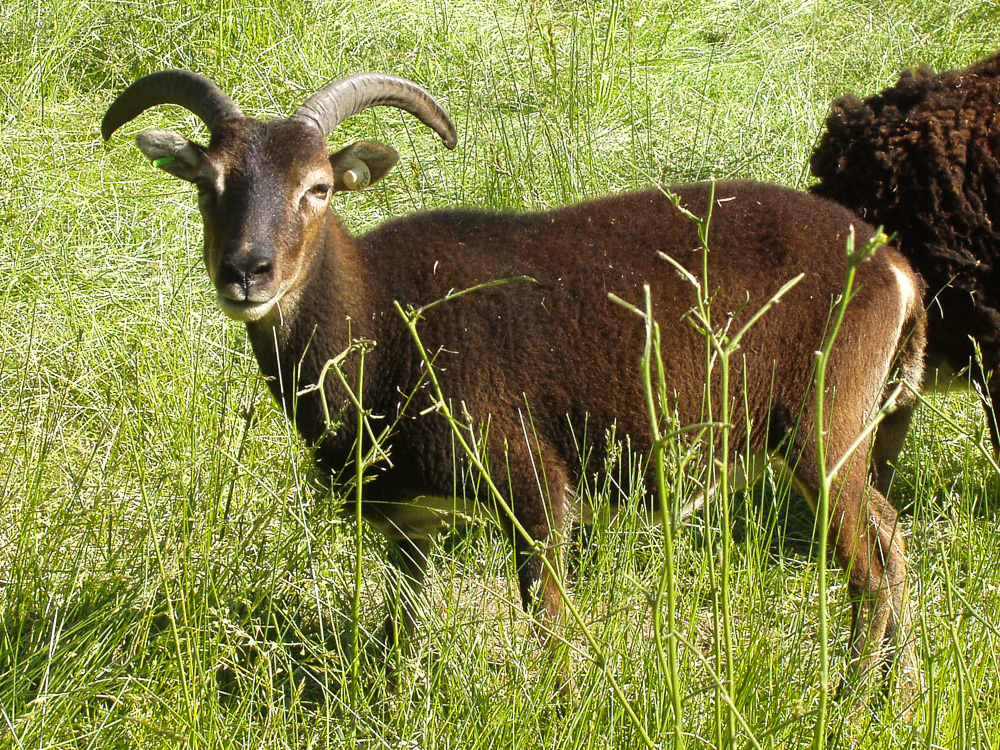 the biggest hassles of sheep husbandry -- shearing. If you leave Soay sheep alone at this time, you will find your fences, gates and trees festooned with gobs of wool. Truth is, Soay sheep often look quite ratty during this phase, but a little hand-rooing by the shepherd spruces them up nicely. If desired, the wool can be harvested by hand rooing when the fleece first begins to loosen. Since sheep can remain standing while their wool is removed, rooing time presents a nice opportunity for the shepherd to interact calmly and quietly with the animals, gaining their confidence.

Soay sheep, with their varied coat colors and stately horns (rams and ewes alike) provide living statuary for your pastures. They just look really good out there in the fields. Up close, they have a winning way with their human keepers, becoming tame, comfortable to mingle with, and charming.