When will the lambs arrive?

Each spring as lambing draws near, we watch our girls gradually grow big, sometimes scary big. We watch and wonder and check the calendar. Gestation is supposed to take 148 days, the books say. We inspect the ladies as best we can — most of them get suspicous and won't stand still for too close a going-over — looking for a sign that something might be imminent. Is Tolcarne's bag filling up? Is Keverne's back end perhaps a little swollen and moist, or are we imagining? Is that a lamb kicking, or just Patterdale's rumen churning its load of grass hay? Again and again the ewes fool us. We confess to being truly sorry observational predictors of who will lamb when.

In due course the lambs do arrive, of course. We just never know which ewe or when until her signs of labor become unmistakable, and then only if we happen to be around to notice. (If we do, then any plans we might have for the next few hours get scrubbed; even now, we are captivated by birth and its subsequent ceremonies and we can't bear to break away to do something else.) Thinking back to other lambing times, we recall that the action would begin with a couple of older ewes starting things off; then there would be a pause, and then a big rush, followed by another pause, and then a trickle of lambings that lasted several weeks. On reflection, we realize this is not so surprising. Like most breeders — and breeding on a farm is very different from what happens with the unmanaged wild sheep on Soay and Hirta — we keep our rams off by themselves, well away from the ewes, until we are ready to commence the Ancient Ritual at a time convenient for our human purposes. Unlike most commercial breeds, Soay ewes do not cycle all year. The onset of estrus is triggered by shortening days in the fall as well as the presence or proximity of a ram. The details are a long story, better left for another day. But now, as February warms into March, we really want to know when we should realistically expect that first lamb, and when the last. 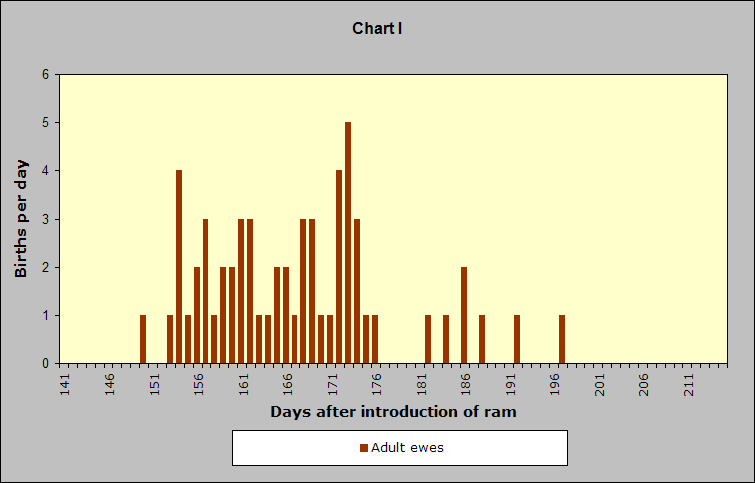 A few years ago, we were casting about for a more reliable lambing barometer than our eyes, which without fail have failed us in the past. Our strategy? Data, of course. Since we collect it religiously, why not use it? And so we went to our records of breeding and lambings and made a straightforward list of all the births that had taken place here. For each pregnancy, we worked out the number of days that had elapsed between the date we put the ram in with the ewes (“ram-in”) and the date each ewe delivered her lamb(s). We put this data in a type of chart known as a histogram (Chart I nearby). There is a vertical bar on the chart for each day we had at least one birth. The height of each bar shows how many ewes gave birth on that partcular day; it ranged from one to as many as five. Note that the height of the bar tells you the number of ewes that lambed that day and not the number of lambs born. That is, the chart does not tell us if there were twins. Also, the chart does not show the actual dates along the bottom, but rather how many days had elapsed between the ram-in day and birthing.

Our records tell us that the earliest we have ever seen a lamb is 150 days after ram- in. The first real wave of births begins about four days after that. We put our rams in on October 13th a year ago. Therefore we didn't really expect any lambings until March 9th and it should have been the 13th before it gots busy.

The gestation period — from conception to birth — is right about 21 weeks for sheep. It differs a little from breed to breed, and values reported for a single breed can vary. This is probably due to the different methods used to establish the conception date: by direct observation of breeding, or by noting a crayon mark left on the ewe's back by a “raddle” worn by the ram, or by simply noting when the ewe passed out of behavioral estrus for the last time. For our Soay, we assume an average gestation length of 148 days, based on a report cited in Island Survivors of pregnancy lengths observed in captivity for ewes that had been taken off Hirta in the 1960's. But ewes are not clocks, and normal gestations will range between about 143 and 153 days. Looking at Chart I with the number 148 in mind, we can infer that most of our ewes were impregnated between the 6th and 26th days after ram- in. 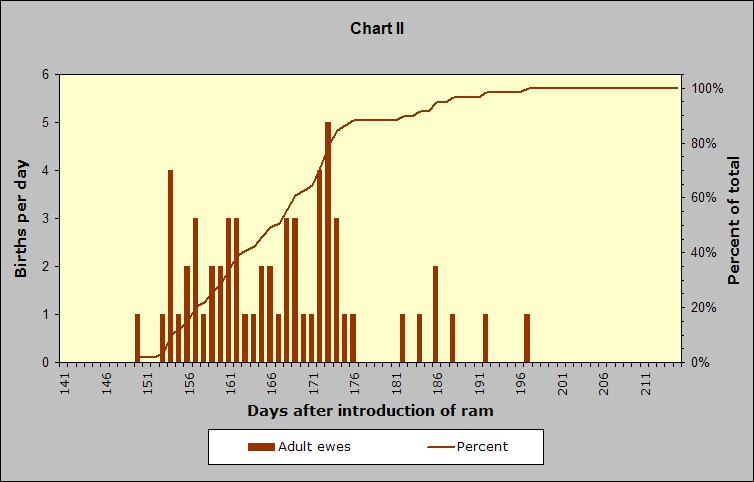 Another thing that would be useful to have a handle on as we look forward to lambing seasons is what portion will be done by any given day. That is, when will we be half-way through? when will we be at the 90% point? and so on. To get at this, we plotted the same information as before in a different type of chart. In Chart II we added a line that shows the day-by-day total of births through the whole lambing process. On the right of the chart is the scale for this line; the data are presented as a percent of the ultimate number of births. A careful examination of Chart II tells us, for instance, that, once lambing starts, roughly 20% of the ewes will lamb in the first week, another 20% in the second week, yet another 20% in the third week. In the fourth week, things get a little busier as 30% of the total number of births happens. After that, things slow down, and it takes several weeks for the final 10% of lambings to take place.

When we assembled the data for Charts I and II, we excluded pregnancies of ewe lambs, lambs bred in their first fall when they were between five and seven months of age. We remembered that these young females generally gave birth much later than their older sisters. Because we currently choose to breed only adult ewes, we wanted to be analyzing historical data that corresponded to the pregnant ewes in our pastures right now. 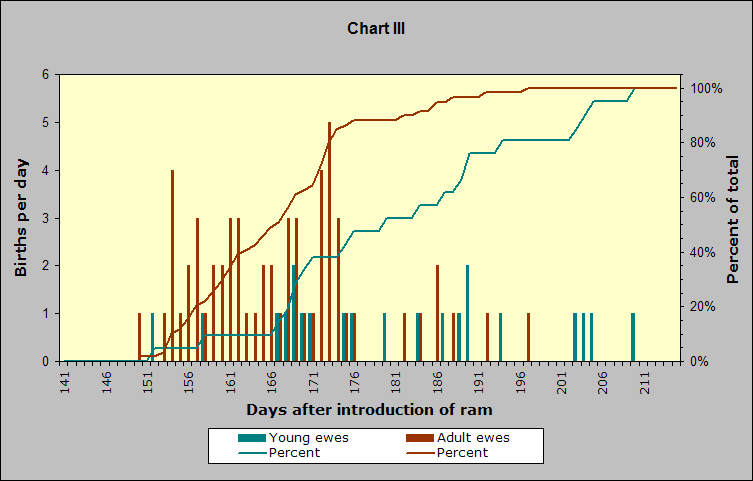 Nonetheless, as avid consumers of data, we wanted to know about the timing for lambings by young ewes. Are they really late deliverers like we thought? Chart III adds young mothers to the data that we saw in Charts I and II, plotted in a different color (teal). With only two exceptions, they begin to lamb two-and-a-half weeks after the adults, and straggle on, the final young ewes only lambing two weeks after the last of the adults. By the time the adult ewes are 90% done with it, the young ewes are only halfway through. This is in fact what we expected to see, and is one of the main reasons we elected not to breed juvenile ewes this go-round.

You may be thinking: “Wait a minute!” There were three questions posed at this beginning of all this, and only two — the beginning and ending of lambing — have been answered. What about the order of lambing? What about Tolcarne, Keverne, Patterdale and the rest? Who will be first, who second, third, and so on? That one, dear readers, seems is destined to remain a mystery, the most elusive of the Ancient Rituals.